Building a tiny FORTH for an Arduino UNO in one week

It was raining hard, a week ago.

And what could you possibly do on a rainy Saturday afternoon?

Well... I was inspired by a series of articles on Hackaday to...

...make a Forth interpreter/compiler from scratch...
...then put it inside a 1.5$ Blue Pill microcontroller...
...then repeatedly squash it until it fits inside an Arduino UNO...
...i.e. inside 2K of RAM!

I haven't done anything even remotely close to this in decades.
I loved building it :-)

The rainy afternoon turned into a week-long hackfest (was looking forward every day to the post-work FORTH-tinkering in the afternoon...)

Here's a recording of it in action:

...and another one, where a small Forth program blinks the Arduino LED:

I meant it when I said "portable" - the source code compiles as-is for both native and Arduino builds.

Another part of my reasoning was that in addition to targeting multiple platforms (e.g. BluePill and Arduino) I wanted to be able to use Valgrind and AddressSanitizer to detect - in the host! - any issues I have with my memory handling. And just as important, debugging with GDB in the native host is much easier/faster.

Since I had embedded targets in mind, I tried ArduinoSTL - but it was too wasteful memory-wise. It also made the build process significantly slower. I therefore built my own memory pool, as well as list, tuple and string-like C++ templates. It was a nice challenge, re-inventing a tiny C++ STL...

And I understand STL a lot better now, after building small pieces of it myself :-)

I setup simulation via simavr. This tremendously improved my developing speed, since a simulator spawns and runs much faster than the real board. Due to the code being portable, debugging took place mostly in the host GDB; and after Valgrind and AddressSanitizer gave their blessing, I usually found out that the simulator (and the real board) worked fine as well.

Thanks to ArduinoSTL, I quickly reached the point of running inside the BluePill. The 1.5$ mini-monster has 10 times more SRAM than an Arduino UNO; so in a couple of days, I had a working branch. 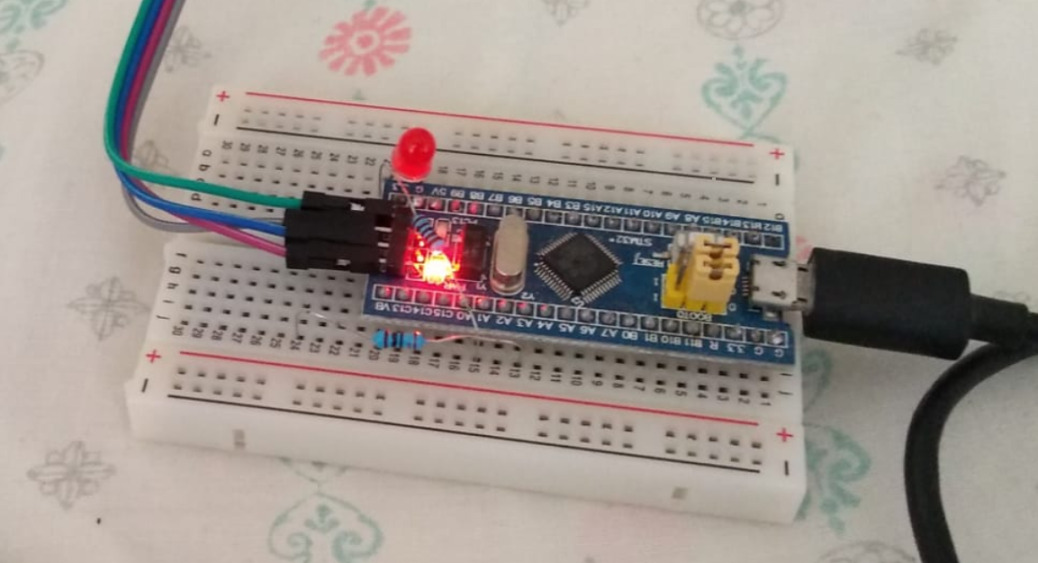 Before the Arduino UNO, I run my mini-FORTH inside the 1.5$ Blue Pill

But as said above, that wasn't nearly enough to make it work in my Arduino UNO. That required far more work (see below).

As for the BluePill, I should note that, as in all my other embedded targets, I prefer a development workflow that is based on normal bootloaders (not on programmers). I therefore burned the stm32duino bootloader on the BluePill, which allowed me to easily program it in subsequent iterations via the USB connection (and a simple make upload).

The same USB connection would then function as a serial port immediately afterwards - allowing me to interact with the newly uploaded Forth in the BluePill.

The screenshot below is from a tmux: on the left, the output from make upload; and on the right, I used picocom to interact with my mini-Forth over the serial port: 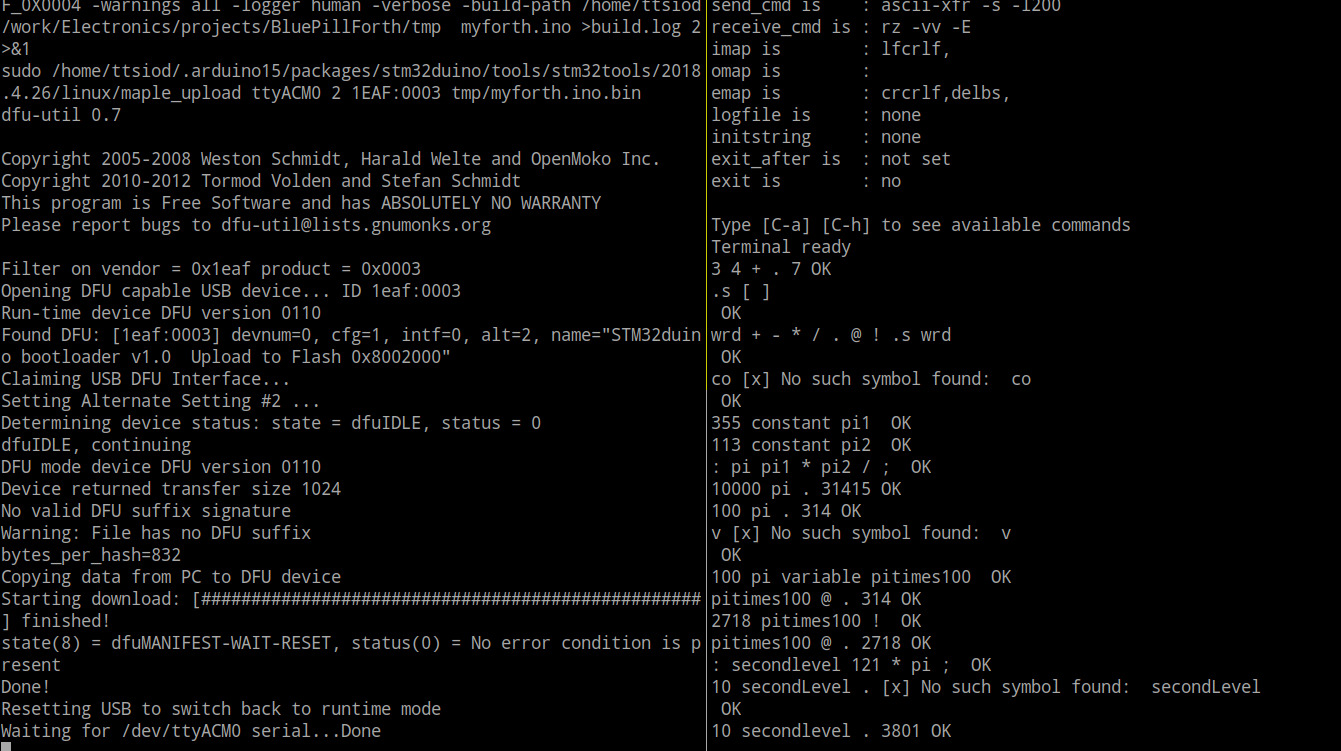 That covered the first two days.

But when I tried compiling for the Arduino UNO, I realised that the ArduinoSTL was not enough. I run out of memory...

So I built my own mini-STL, and tightly controlled all memory utilisation.

I also used macro-magic to move all strings to Flash at compile-time (see dprintf in the code)... And saved memory everywhere I could, re-using error messages across various operations - and storing the entire array of native operations in Flash.

Nothing flexes your coding muscles as much as optimising; whether it is for speed or for space. See the implementation of ".S" for example, where the (obvious) stack reversal code is also the most wasteful... Changing it to a slower but memory-preserving algorithm allowed me to use ".S" even when almost all my memory is full.

I know that many developers hate C++. I even wrote a blog post about it.

And I understand why - they see code like this...

...and they start screaming - "what the hell is that", "incomprehensible madness", etc.

But there are very important benefits in using C++ - and templates in particular. You write less code, with no additional run-time or memory overhead compared to C, and with a lot more compile-time checks that watch your back (for things that would otherwise blow up in your face).

You can't "forget" to check the potential for a failure coded inside your returned value - because your code has to "unwrap" it. I could have done this better, but I chose to implement it via simple tuples (this was a one-weeks-afternoons hack, after all :-)

As for the template "magic" incantation above - it is true magic: My forward_list template is using free-lists to store the pop_front-ed elements and reuse them in subsequent allocations. I wanted these free-lists to be global (i.e. static members) because lists of the same type must re-use a single, commonly-shared free-list. The magic spell tells the compiler I want to instantiate these globals once, for each type T that I use in any lists in my code.

My Forth test scenario - including a FizzBuzz!

Yep, FizzBuzz - we are fully Turing complete. And would surely pass Joel's interview :-)

I am a strong believer in automation. The final form of my Makefile therefore has many rules - e.g. make arduino-sim - that automate various parts of the workflow.

Here's what they do:

Another example of automation - the complete test scenario shown in the previous section, is not just an example in the documentation; it is extracted automatically from this text and fed into the Valgrind and AddressSanitizer tests... and also into the Python testing script that sends the data to the board in real-time.

But that wasn't the point of this - the point was to have fun and learn Forth.
What better way to learn a language... than to actually implement it! :-)

Fork the code, and enjoy tinkering with it!