I've been fooling around with SW-only 3D graphics for quite some time. A couple of years ago, I ported the main logic into an ATmega328P microcontroller, implementing "points-only" 3D rendering, and driving an OLED display via the SPI interface... at the magnificent resolution of 128x64 :-)

The challenge - run it on the Speccy

So the path to even more useless tinkering was clear:

Here's the complete code. There's a simple Makefile driving the build process - so once you have z88dk installed, just type:

The resulting statue.tap file is also committed in the repo, in case you just want to quickly run this in your FUSE emulator.

The cross-compiler used for the compilation is z88dk. If it's not packaged in your distribution, you can easily build it from source:

You can now use the cross compiler - by just setting up your enviroment (e.g. in your .profile):

On 3D projection and Z80 assembly

Since the Speccy's brain is even tinier than the ATmega328P's, I had to take even more liberties: I changed the computation loop to orbit the viewpoint (instead of rotating the statue), thus leading to the simplest possible equations:

No multiplications, no shifts; just two divisions, and a few additions/subtractions.

But that was not the end - if one is to reminisce, one must go all the way!

So after almost 4 decades, I re-wrote Z80 assembly - and made much better use of the Z80 registers than any C compiler can.

Almost a 2x speedup... Reaching the phenomenal speed of 10 frames per sec :-)

I was also curious about precalculating the entire paths and the screen memory writes - you can see that code in the precompute branch.

As you can see in the video above, this version runs 4 times faster, at 40 frames per sec. It does take a couple of minutes to precompute everything, though. Since I had all the time in the world to precompute, I used the complete equations (for rotating the statue and 3D projecting) in 8.8 fixed-point arithmetic: 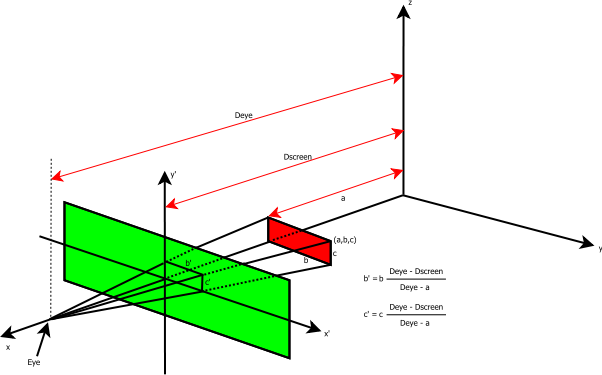 The reason for the insane speed, is that I precompute the target pixels' video RAM locations and pixel offsets, leaving almost nothing for the final inner loop, except extracting the memory access coordinates from 16 bits/pixel:

It's also worth noting that the inline assembly version of the "blitter" is 3.5 times faster than the C version. Since these are just reads, shifts and writes, I confess I did not expect to see that much of a difference... But clearly, C compilers for the Z80 need all the help they can get :-)

Next step - the real thing

Now all I need to do is wait for my retirement... so I can use my electronics knowledge to revive my Speccy, and test this code on the real thing, not just on the Free Unix Spectrum Emulator :-)

Then again, maybe you, kind reader, can try this out on your Speccy - and tell me if it works?