TL; DR: Another year, another SBC! This time, it's a 4-core RK3328, with Gigabit Ethernet and USB3. My fastest ARM-based computer yet!

Let's install Armbian on it, and put it through performance tests.

I received the Station M1 a few days ago - courtesy of Firefly. 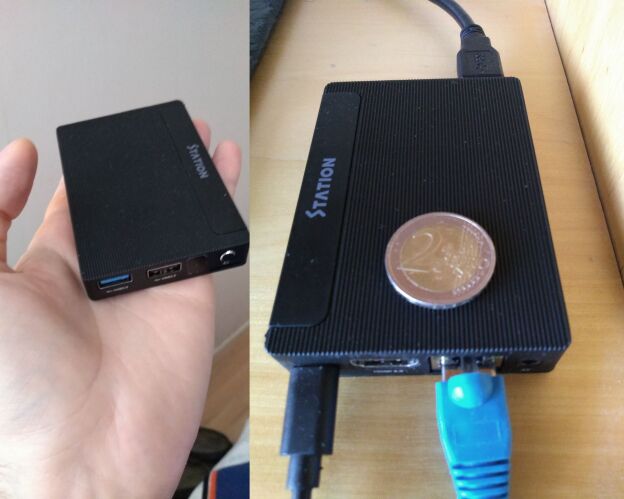 Credit-card sized, inside a metal enclosure

The SBC came with a power adapter, so I plugged it in, connected a Full-HD monitor to the HDMI port, and... 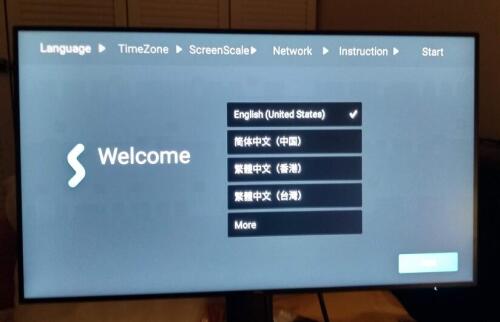 After 5 minutes of configuration setup, I ended up with a fully operational Android 10 set-top box experience; with the provided remote control allowing easy control of the pre-installed Kodi.

But if you want to see an Android review of this SBC, you are on the wrong site :-)
I have far more fun hacking Android than I ever have using it.

So, to quote a famous electronics Youtuber:

...and I'll add: "...and then install a fully open-source OS, compiled from scratch".

There are 4 screws holding the enclosure firmly in place. After removing them, the insides of the SBC are easily accessible: 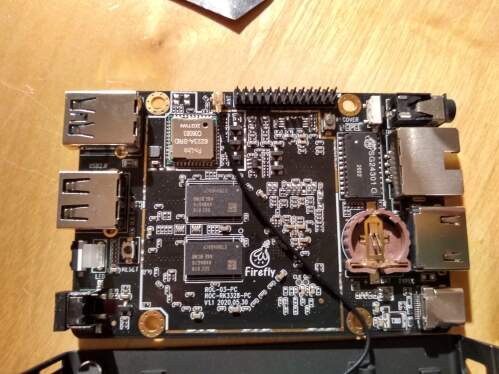 As you can see, the Wi-Fi antenna is already pre-installed; the two chips giving my SBC 2GB of RAM are easily identifiable; and on the top, the GPIO pins that make SBCs what they are - perfect toys for makers :-)

In case you are wondering, yes, that's a battery slot for an RTC. I always use NTP, of course - but this is a nice perk for usage scenarios where the SBC is not connected to the web. 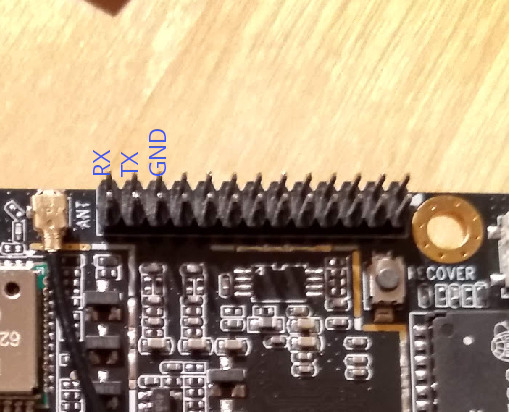 The issue of SW - Armbian

At a high level, there are basically two options with most ARM SBCs (including this one).

I am firmly in the second camp. I don't know where the makers of the Station M1 stand on the subject, but as a rule, SBC builders rarely - if ever - update their custom distros. I can't abide by that.

I therefore prefer building the entire, flashable Armbian distribution for my targets myself - from source. There is no better way to trust my SBCs, than knowing that I built their OS myself; and that I can go as deep as I want and debug everything using the source code... From the deepest dungeon at kernel level, all the way to the top-level bash scripts.

Then again, I do this sort of thing for a living. Your mileage may vary.

If you do decide to build from sources, the board is marked in the Armbian repo as CSC - so you need to enable the CSC option during the build, and then choose "Station M1". Other than that, everything just worked; building went just as smoothly as any other flashable Armbian image I've compiled:

Since it takes some time to do this build, I performed it from an Ubuntu-Focal Droplet that I created in my Digital Ocean account. At a cost of 3 cents per hour and a total build time of approximately 3h, I paid 10 cents to have fully traceable SW for my SBC.

Another option you have is to trust completely the Armbian developers - and simply download the pre-built image.

In either case, you then "flash" the image in any micro SD card. In my case, I executed something like this:

When running this command, my Micro-SD card was inside a USB adapter plugged-in and visible under /dev/sdc. Make sure you use the appropriate target here, otherwise you will wipe out your own machine's data! The output of dmesg is your friend - look at it (as well as the output of lsblk) to see the name of the device for your SD writer.

The sync output flag of dd caused a significant improvement in reliability with my SD writer. You may or may not need this option - but if you don't use it, make sure you actually invoke sync after dd is complete. And you will definitely benefit from a big block size (bs=1M) and a nice and simple progress report while the writing takes place (status=progress).

Most importantly: don't you dare remove the fullblock iflag. Trust me on this - you need it.

After that, I plugged the Micro-SD card in the Station M1, and booted - in a normal, Armbian boot. I didn't use my USB-to-TTL adapter this time; the HDMI cable offered a far easier way to interact with the boot process - and a keyboard plugged in the USB2 port allowed me to easily work with the system.

I then connected the SBC directly to my router (over the Gigabit Ethernet port), setup SSH, rebooted, and SSH-ed into the machine from my laptop.

Since I hate the speed and reliability aspects of Micro-SD cards, I then proceeded to migrate into an external USB3 drive. I can probably migrate into the EMMC, but I chose not to - I prefer to keep it in its pristine ("Android-y") state, for easy re-use when COVID allows me to visit people again. A credit-card sized, portable set-top box is always nice :-)

To migrate to the external drive, I copied everything in the root fs into a freshly formatted 5GB ext partition. The rest of the drive was formatted as a LUKS-encrypted drive, which will take advantage of the crypto instructions in this SBCs ARM cores.

I then modified two files in the SD-card filesystem to make the system boot from the USB drive instead:

The device UUID is easily obtainable via blkid -c /dev/null.

That's it - the SBC now works from reliable, fast storage.

How fast is it, with USB3 storage?

Well, don't take my word for it - let's watch it in action:

What you can see in this asciinema video:

OK, but what if we stress the machine? Let's benchmark the device with my renderer.

My renderer uses all available cores, and stresses the memory and the FPU a lot [1]. You can see results from all kinds of machines running it via the Phoronix test suite.

For completeness, I include the results from all my ARM SBCs - so you can compare for yourself.

The Station M1 scored 32.7 fps. It never exceeded 1.3GHz while doing so, which makes me think there's more potential here - the Armbian defaults can probably be bumped up. Not that I need more horsepower (it offers more than what I need) but it's still nice to know there's room to grow.

Also, very importantly - notice that even though we stressed the machine to an extreme - all cores fully utilised (see second run with top in the first tmux pane for confirmation) the temperature never went above 53C.

The enclosure barely felt warm during the test; nothing even remotely concerning. From a thermal perspective, amongst all my ARM SBCs, this is the one I trust the most.

Is it truly a Gigabit device?

Well, the best way to confirm it, is to use another machine on the same Gigabit network, to send/receive data and benchmark via iperf3.

OK - so we know this is a more than fast enough SBC, with fast USB3 storage and Gigabit networking. But how does it fare in terms of power consumption?

I revert the configuration to a Micro-SD based boot - to see how we score without an external USB3 drive attached:

I haven't yet exercised all features offered by this SBC. I am especially looking forward to playing with its OpenGL capabilities :-) ...but my overall impression so far is very positive. The combination of the metal enclosure with a respectable performance at a low power consumption, while giving Gigabit networking and USB3 speeds, makes it a very nice machine indeed.

Aeons ago, I used SPARCstations - back when I was a student. And I was more than happy with what I could do with their 40MHz brains.

To see now these ARM devices offer so much power, in credit-card-sized enclosures... It is really mind-blowing.

[1] The reason I avoid sysbench, dhrystones and the like, is because they really aren't representative "loads". My renderer is a far better overall stress tester - checking the performance of integer and FPU calculations, done by multiple cores, while at the same time stress-testing the memory bandwidth.

If you liked this article, you'll probably also appreciate... Well... what can I say? I love SBCs :-)